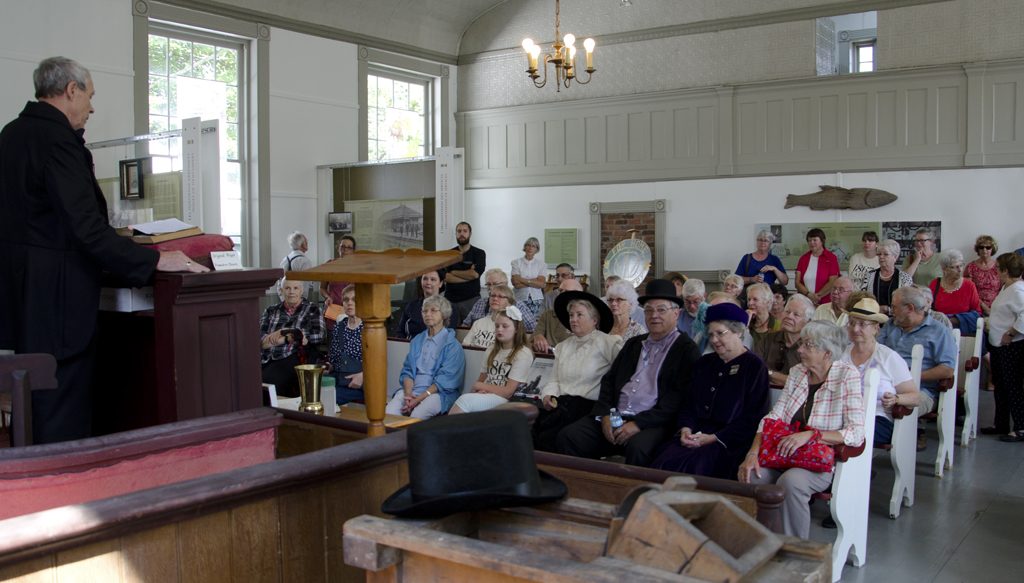 «Slow down,» the sign said, «you are in 1867.» It was August 13 at the Eaton Corner Museum. The pavement proclaimed the year as 2017, but the bustling crowds, the characters in costumes and activities all shouted 1867. « It was a grand crowd », said event coordinator Jacqueline Hyman. « More that 400 people attended, and many of them stayed for a long while. »
The day re-created many aspects of life when Eaton Corner was a busy regional centre 150 years ago. In the Foss House, Serena Wintle and a team of 15 experts demonstrated needle arts: quilting, chicken scratch embroidery, tatting, and more. Outside, basket making, candle making, caning and blacksmithing were happening, alongside olden games for children and farm animals showed off by members of the Sawyerville 4-H Club.
In the old Congregational Church, the Tales of the Townships permanent exhibit and Denis Palmer’s artwork provided the backdrop for a vivid description of village life in 1867 by historian Monique Nadeau-Saumier. The pews was packed for her talk, for a short sermon by the historical minister, Rev. Sherrill, and for a participatory hymn sing.
Beside the church, musicians Will Lemaistre and Franklin Heyburn fiddled for square dancing called by Jim Naylor. Other musicians were Terry Howell and Dave McBurney, Sweet Poutin, and Janice Graham. In the Academy, delicious tea and scones were served to crowded tables of hungry visitors.
Down the road, Marc Nault demonstrated the old fashioned construction method of timberframing, and Germain Boutin plowed a good stretch of field with his magnificent team of Belgians.
And everywhere, historical characters organized by Sharron Rothney roamed the area in costume, ready to tell their stories. Entrance was free of charge, thanks to a contribution from the Government of Canada, the strong support of some 50 volunteers, IGA Cookshire, and Desjardins Caisse des Hauts-Boisés. « I’m very proud of everybody who contributed », said Hyman. « They did a superb job. »