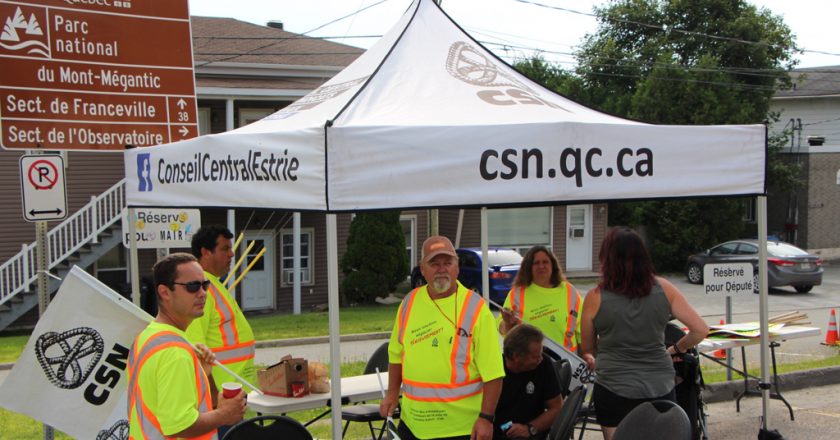 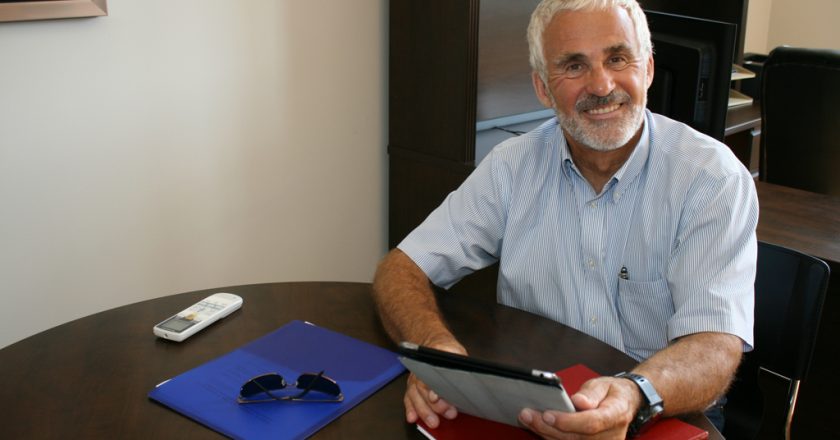 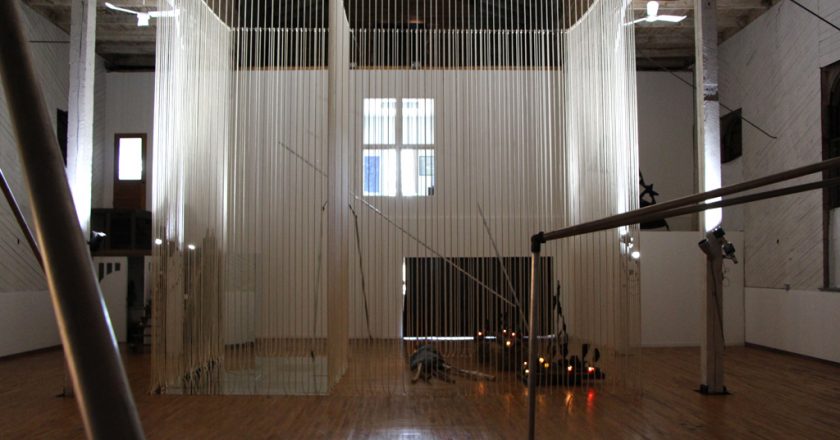 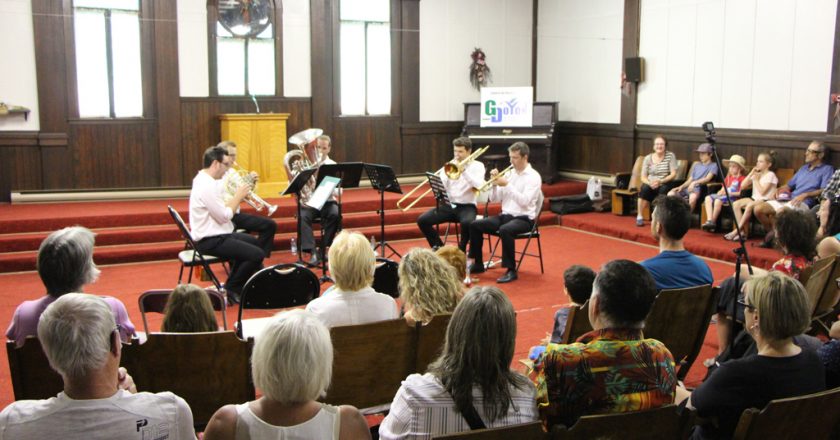 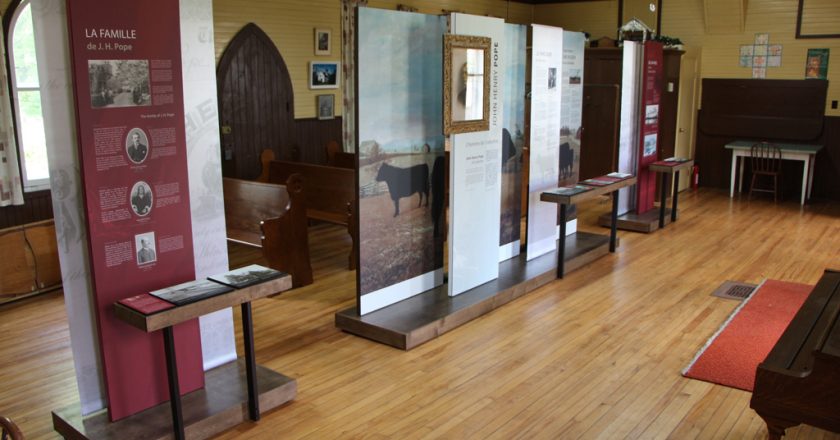 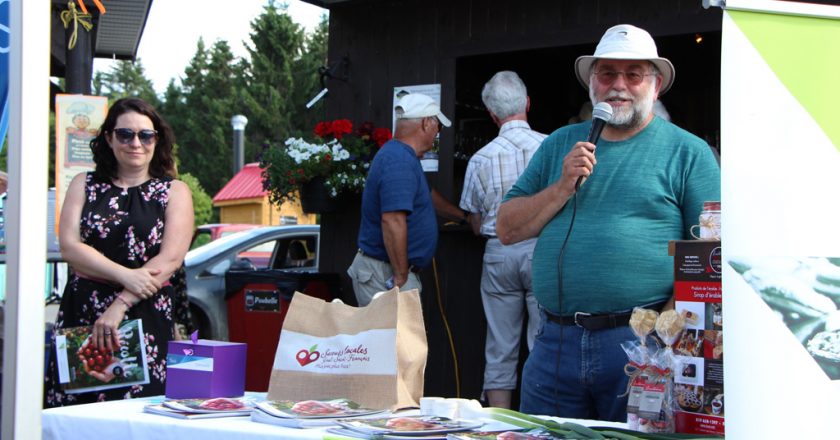 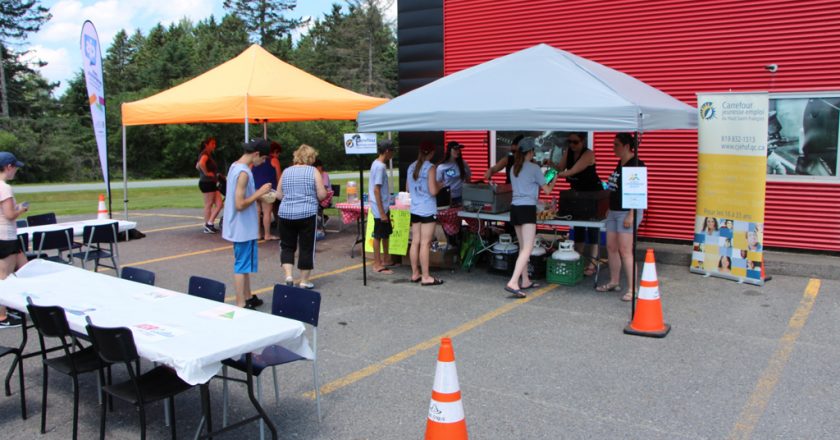 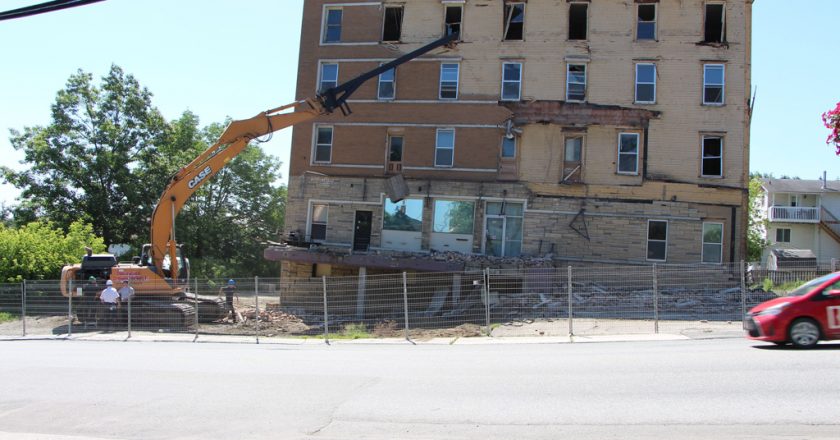 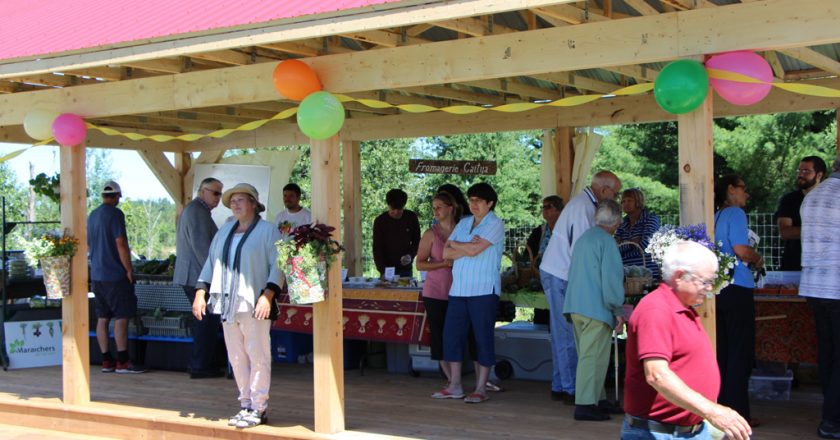 At its first village market of the season, the Sawyerville Community Garden inaugurated its new wooden shelter. The new structure is meant to protect the local producers who come to sell their products during the Saturday markets, and will also be available for other activities of the Garden.

The organizer, Chantal Bolduc, was visibly satisfied with this new addition to the Garden. «It’s a great achievement. People are glad to see it. It’s welcoming.» Besides the village market, the shelter will also accommodate workshops and trainings, «whether about herbs, flowers, NTFPs, or mushrooms,» said Bolduc. NTFPs are non-timber forest products.
The new red roof will also be available for use by the public. Interested persons can rent the site, including the outdoor bread oven, electricity and running water, for private receptions such as baptisms or marriages. The funds thus received will be re-invested in the activities of the Garden.

«We work a lot with the materials that people give us, such as wood, gravel and straw,» said Bolduc. «I’m talking about donations of materials, but it took many human donations to assemble all of this here. It’s all volunteer work, what we’ve done here.»

The shelter, measuring a dozen metres long, can accommodate up to five producers simultaneously. The other exhibitors continue to use the canopies that have been used since the beginning of the Community Garden. These need to be assembled and dismounted for each market day.

Brenda Thomas and Suzanne Marrow of Légumes Korzina have been selling their fresh produce at the market for the past three years. They are among the lucky producers who were installed under the new shelter for the first time, alongside the Maraichers de l’or vert, the Fromagerie Caitya, and Le Sabot d’or farm. Thomas and Marrow were more than satisfied with their new roof, which does not risk to be blown away in the wind, as has already happened to them in the past. 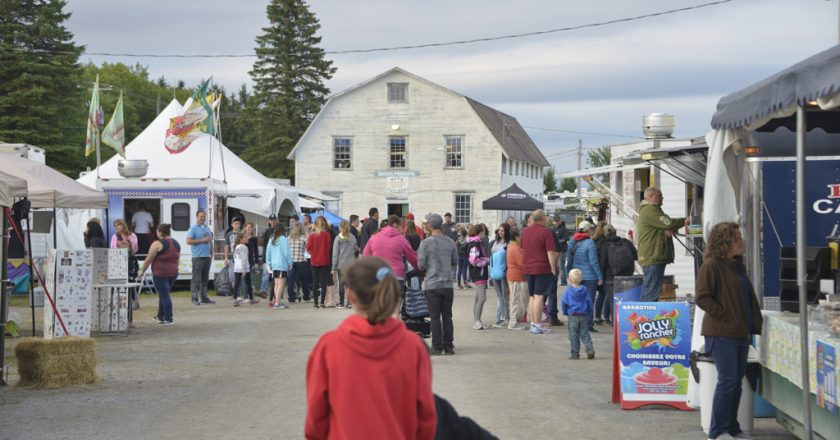 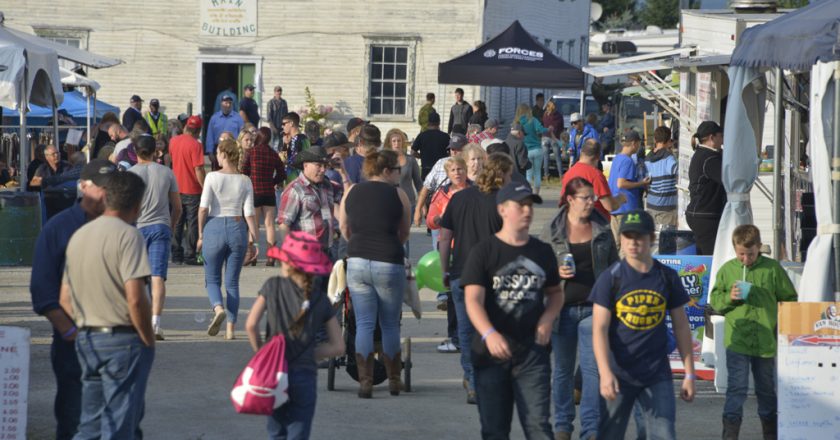 What has become an annual tradition for the Cookshire-Eaton municipality and the Haut-Saint-François region begins in a bit more than a week. This year’s Cookshire Fair is to take place over the four days of Friday, August 16, to Sunday, August 19. More than 10,000 visitors are expected at the agricultural fairgrounds looking for what has ensured its success for close to 175 years: animals, machinery and amusement park rides.

Expected Returns
The Cookshire Fair is part of the DNA of the region, and is a rendezvous point for rural and urban worlds. For some, the Fair is a time to meet up with childhood friends they went to school with. In 2018, this annual get-together continues to build on its traditional foundation.

Whether by machine or by horse, the pulls are what distinguish the Cookshire Fair from others. On Saturday, August 18, the Association Sportive de Tire de Tracteurs du Québec arrives in town with its tractors, trucks and other semi-trailers. The next day, it is the turn of draft horses to be featured in a similar show of force. The day is to begin with a grand final parade, bringing together all the exhibitors who have taken part in the event.
Animals are to be in the spotlight as well, during competitions and judging events. Several categories will mark the four days of activities. Friday belongs to poultry, sheep and goats. During the day on Saturday, beef cattle and Ayrshire and Holstein milk cows will be featured, and competitions of equestrian agility are to take place in the arena.

The weekend of festivities begins on Thursday evening with the traditional bingo game. The rides for children and adults will also be in operation every day. Not to forget the sewing demonstration on Saturday morning inside the main building. Adding spice to the whole event will be performances by the Country Swingers and the Slightly Haggard music groups.

Proper Preparation
The president of the Cookshire Fair, Jonathan Sylvester, reminds us that the agricultural fair organizers prepare early for this event. For example, they carried out their mechoui and Show’N’Shine fundraising activities last May and June. Sylvester, who grew up on a dairy farm near Sawyerville, presented certain of his own animals during this event when he began to be involved in the organizing committee some 15 years ago.

Even though the first edition of the agricultural fair was in 1845, the event has withstood the test of time, and its organizers envisage the future with hope. The fair’s main building is more than 80 years old, and it is the next big project in the renovation of the site. Its roof leaks, and the structure is without a basement or a foundation. Those who meet in the building have to submit, sometimes, to the vagaries of the outside weather. Nevertheless, the team is still on the lookout for new and enthusiastic members to ensure the continuity of this event. 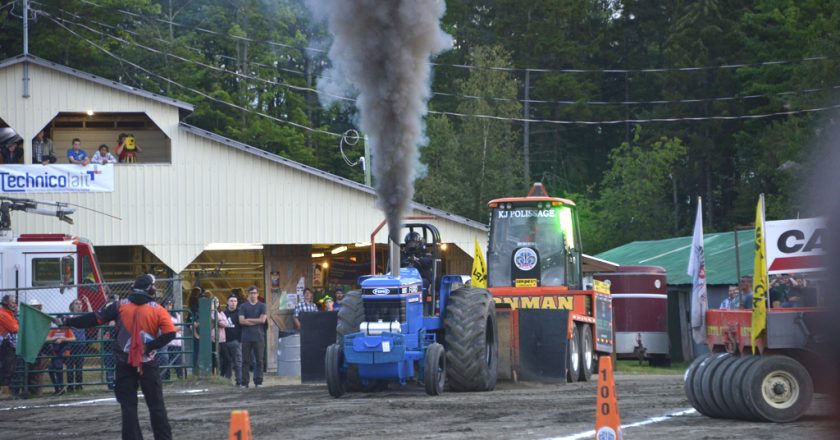 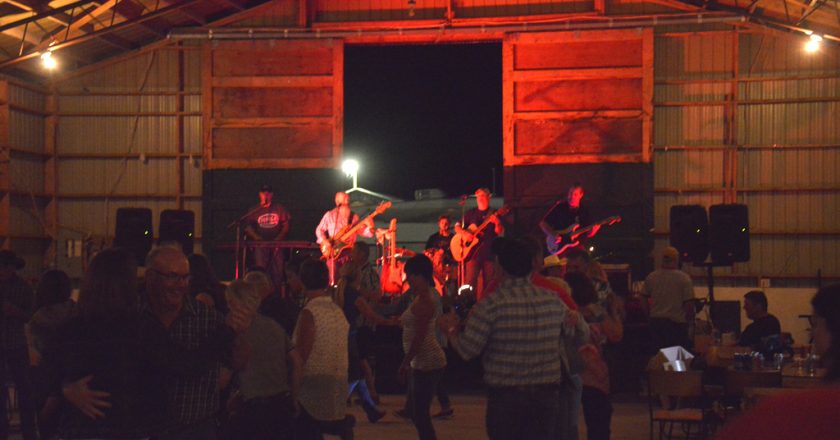 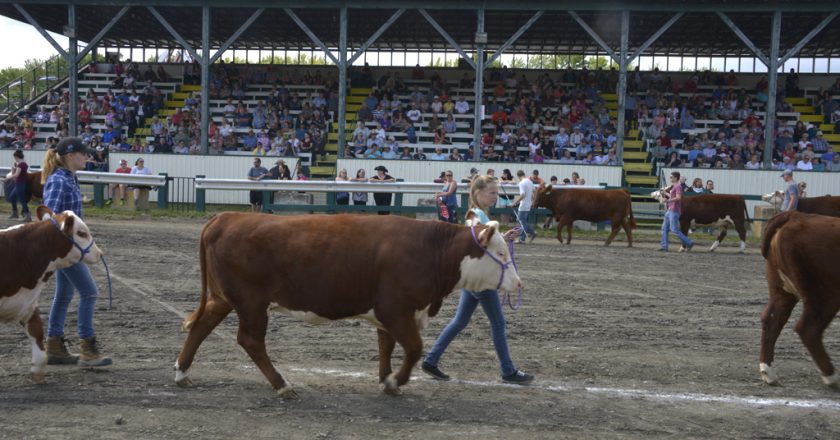 For the Cookshire Fair, 2018 is a pivotal year. The event has more than a century under its belt, but is updating its image and incorporating new activities, such as mini-tractor pulls and power saw sculptures.
“Everything that you see and perceive at the Fair is different this year.” Those are the words of Nicolas Lachance of the organizing committee, summarizing the extent of the changes coming to the Cookshire Fair in 2018.
First of all, the event has a refreshed and rejuvenated image. A new logo and a new website have been unveiled to the public and put online. Among the attractions on the ground, an agri-food pavilion will promote local and Quebec products. Visitors can taste delicacies and gather together around bistro tables.

The machine pulls will have a new feature, mini-tractors, which are modified lawn tractors equipped with motorcycle engines. In the animal competitions, the expertise of youth will contribute to the judging for certain classes. That is, the jury for certain competitions on Thursday and Friday, August 16 and 17, will include members of the 4-H club, whose mission is to develop the interest and the competence of youth in nature, forests and the environment through educational and leisure activities. In addition, a new breed, long-haired Highland cattle, will make its entrance in the judging competitions this year.

Throughout the four days of the Fair, a number of activities will take place for the first time. On the opening evening, Thursday, a karaoke contest will let listeners discover some of the best vocal talents in the area. The next day, a Christmas tree contest will permit amateur lumberjacks to compete in sculpting logs with a power saw. Inside the main building, demonstrations of floral arrangements and Christmas ornaments will be offered. On Saturday evening, a country/pop dance workshop will attract music enthusiasts, followed by the main shows of truck pulls and the Slightly Haggard music group.

In the context of its rebranding process, including its website and its external communications, the Cookshire Fair has been endowed with a new logo. The previous one was the work of the Newport artist, Denis Palmer. The new logo adopts a modern and refined look. The O of “expo” reminds one of a tractor wheel and, at the same time, the contour of a prize ribbon awarded during a judging competition, whether involving animals or plants. As well, the number 1 in the centre is reminiscent of the first position that the various exhibitors all covet. 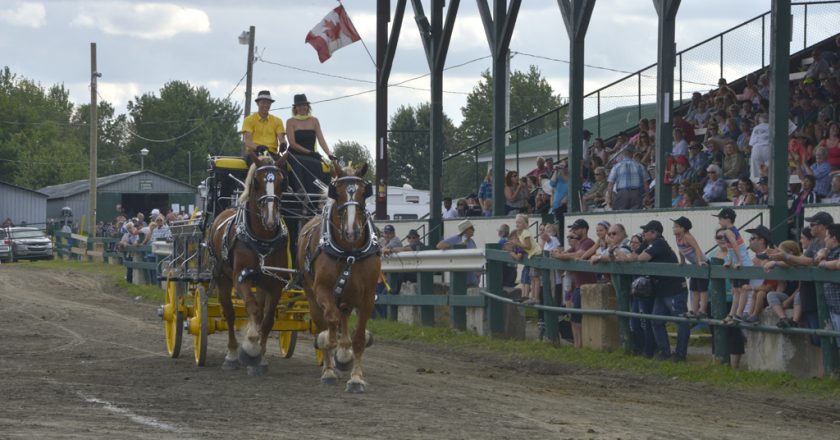 One of the elements that has made the Cookshire Fair so successful over the decades is the animals. The 2018 edition will not fall short in this task, with the presence of many majestic beasts. The horses will star in various events ranging from the pulls to agility or parading in fancy dress. Featured will be both light horses (horsemanship, riding) and draft horses. Some teams will have up to six horses. Not to be outdone, cattle have several categories of competitions reserved for them. First, beef cattle will be paraded, followed by dairy cattle organized by breed: Ayrshire, Holstein and even Highland. Finally, a visit to the barn at the fairgrounds will offer a view of poultry, sheep and goats.