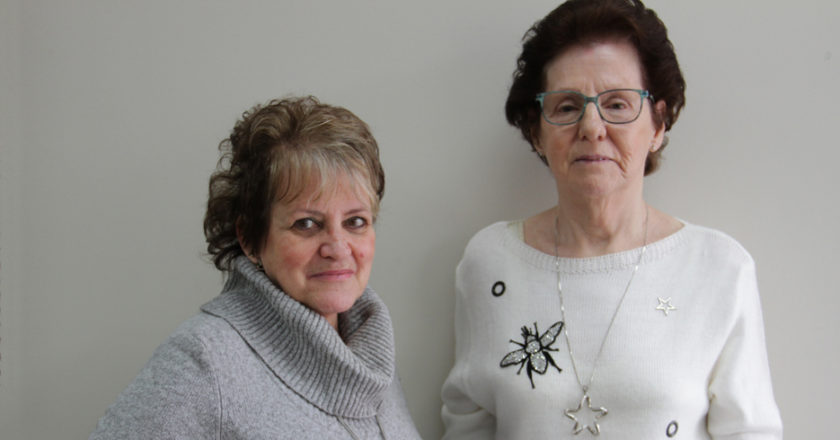 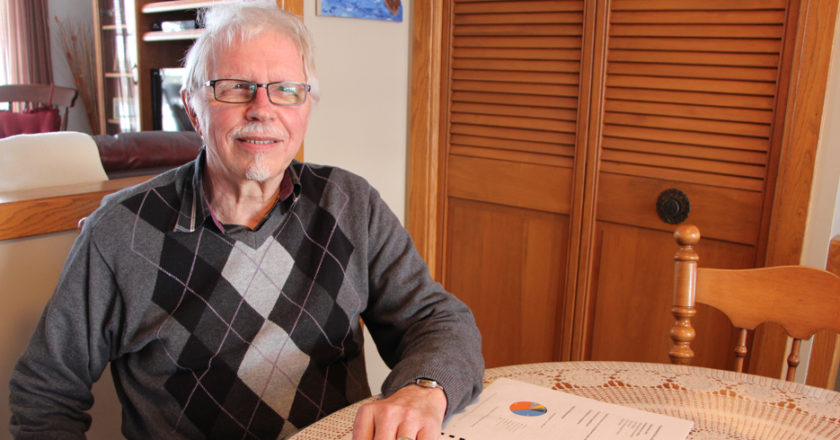 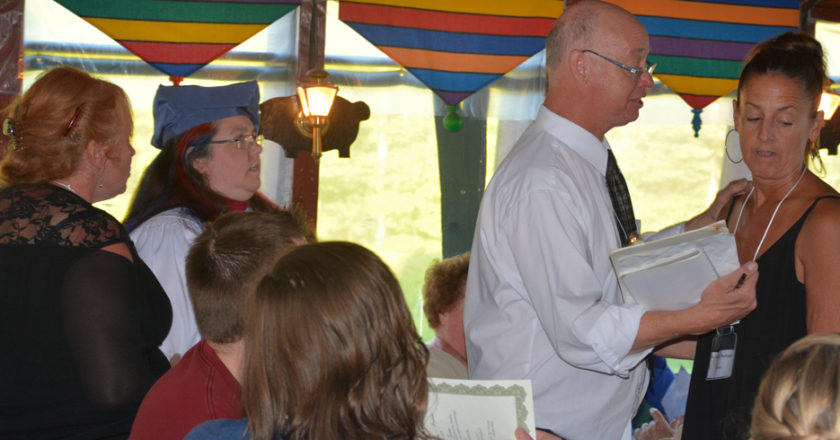 Mead Balwin (centre) in action during a Murder Mystery Dinner at the Piggery Theatre in 2018. Actors Diane Grenier and Tami Spires are on the left in the photo.

Mystery Night at the Museum. That’s the theme of the Eaton Corner Museum fundraiser on February 15. It’s coming up fast! The evening is a murder mystery dinner theatre show, crafted by Mead Baldwin and improvised by a team of local actors.

“Usually we have a play in February, but this year we thought we would try something different,” emailed Linda Hoy, member of the Museum’s board. The something different? A Mead Baldwin creation of a participatory murder mystery, where the guests try to solve the mystery.

“The scene is an Open House at the Eaton Corner Museum. where some antiques are on display and a few might be sold. During the three-course meal, the cast will mingle and chat with table guests. Your job is to learn as much as you can about the characters during the evening….just in case.”
Just in case, that is, one of them is a murderer, and another of them is the murdered!

Mead Baldwin has been creating murder mystery dinner theatre productions for more than 30 years, many as charitable fundraisers. “I’m a bit of a theatre geek,” he said.

When he was a minister in Ontario, attended his first dinner theatre. It inspired him to create his first murder mystery dinner as a fundraiser for the church in Fitzroy Harbour. “We had so much fun!” he said.

When he moved back to the Townships in 2009, he brought his passion along with him. He organized a variety of performances. “One of the best was for a refugee sponsorship group in Ayer’s Cliff, when Wade Lynch played the role of Queen Elizabeth at her 90th birthday party.” Another was at the Snowshoe Club, where the Liberal Party leadership race resulted in a few murders. He’s done weddings, funerals, and a spoof of the Dragon’s Den TV show.

What he’d like the Eaton Corner Museum audience to know is that “at some point in the evening, they have to try to solve the mystery. So it’s not a bad idea to come with a notebook and pens. But the most important thing is to have fun and enjoy yourself.”
How does a murder mystery dinner work? “He crafts the overall premise, then he comes up with characters,” Spires said. “He comes up with a background bio for each character. In the frame of the theatre, each character has two or three secrets, which they share with people who bought tickets, during the dinner.”

“Some of the secrets might be significant clues, and others might be red herrings. There’s so much murder mystery mayhem for the senses!”
Because the theatre is improvisational, it’s hard to know exactly what to expect. “Some of his creations have been serious; others have just been fun and campy. People will laugh; they will ooh and aah,” Spires said.

Mystery Night at the Museum is to have 12 actors, some local and some who have worked with Baldwin in previous productions. The actors are Mead Baldwin, Morgan Côté, Diane Grenier, Linda Hoy, John Mackley, Lynn Rothney, Ben Ryan, Tami Spires, Trudy Tincarre, and maybe more.

When? It’s Saturday, February 15, at 5:30 p.m. Where? At the Sawyerville Community Centre, 6 Church Street. What is it? It’s a full supper, complete with “an evening of murder, mayhem and mischief,” as the poster promises.
The persons responsible for the dinner are Serena Wintle and Violet Lister. It’s a sit-down meal, Wintle said, but the main course may be buffet-style. She promises a full three-course meal of homecooked food, starting with salad, and wrapping up with desserts and tea or coffee.

Tickets are $30/person. Reservations are available only until Sunday, February 9, and seating is limited, so if you want to attend, you need to call right now: Elaine, 819-563-8700. To facilitate planning the meal preparation, the Museum is asking registrants to pay in advance. You can send payment by February 9 to Elaine Lebourveau, 6 Carl Street, Sherbrooke, QC J1M 2C9. Or call her to make other payment arrangements.

MEET-UP, 11th
The Cookshire-Eaton branch of the Association féminine d’éducation et d’action sociale (AFEAS) extends an open invitation to a Meet-Up on Tuesday, February 11, from 1 to 3 p.m. at their room in the Cookshire-Eaton Town Hall. Come meet people, chat, have a coffee, play games, knit or whatever. This monthly activity is free of charge; no reservations needed. Enter the Town Hall building via La Source Street. Info: Diane Mathieu, 819-875-3057 or dianepotvin@bell.net.

GRIFFITH & PALMER EXHIBIT
The Denis Palmer and Libbey Griffith art exhibition is on at the Cookshire-Eaton Art Gallery until February 23.

The oil paintings by Griffith and watercolours and prints by Palmer fill the space to overflowing, as did the generous crowd during the vernissage.

Griffith’s many portraits are intriguing and introspective,. Short quotations offer a verbal characterization of the model that complements the visual portrait. Likewise, many of Palmer’s works include written quotations that offer insight into the personalities of his subjects. 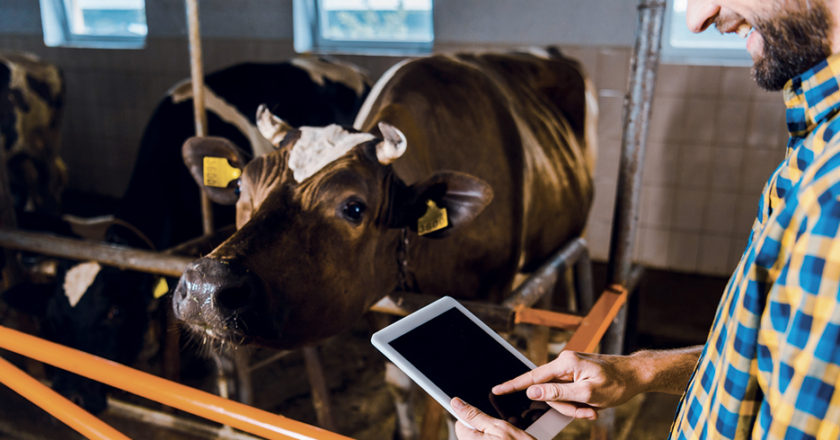 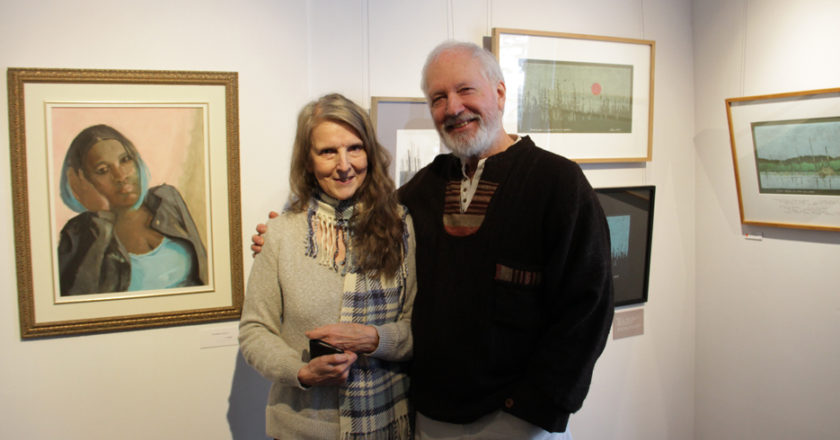 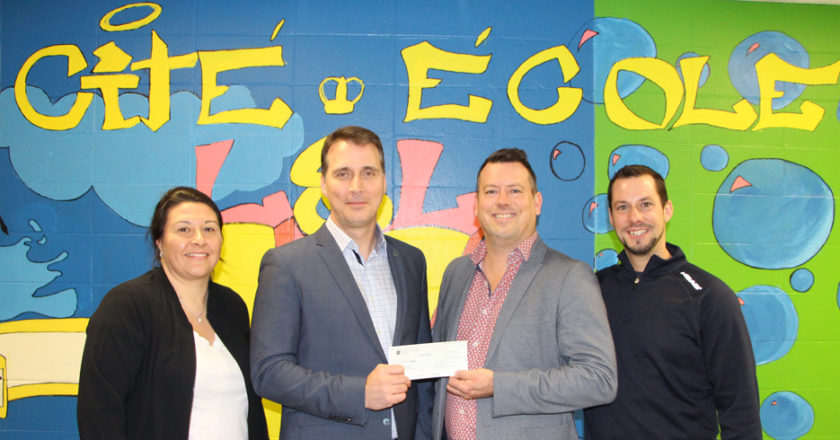 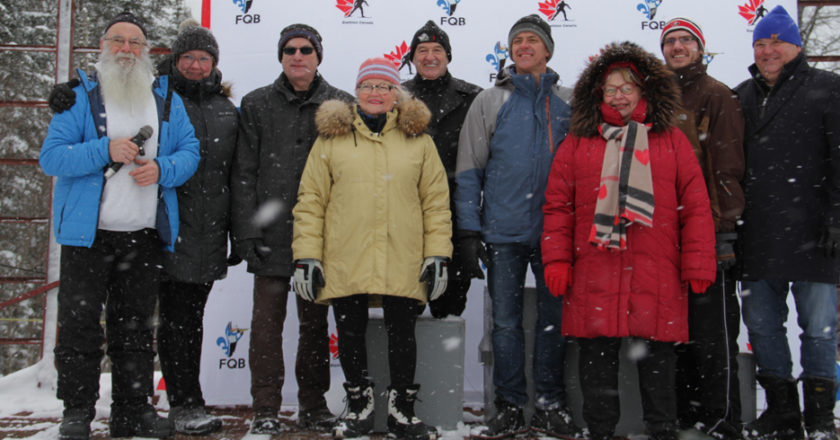