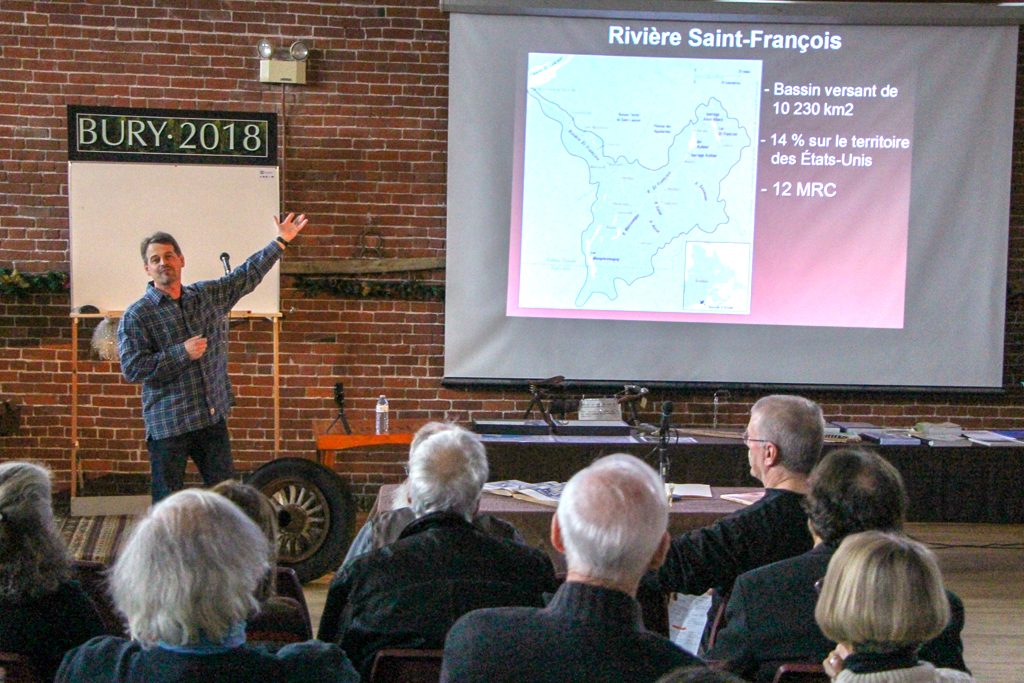 The conference on the history of transportation in the Haut-Saint-François brought together a hundred persons in the Armoury of Bury, at the beginning of the month. The day’s menu was packed full with five presentations and embellished with kiosks and a video.

The organisers said they were delighted by the keen interest the event generated. The conference was a collaborative venture by the Bury Historical and Heritage Society and the Eaton Corner Museum.

Aboriginal Peoples
The day began with a presentation by Éric Graillon, archeologist at the Sherbrooke Museum of Nature and Science. Graillon presented the results of research carried out in the Haut-Saint-François. The research traced certain routes used by the ancesters of First Nations people in their seasonal movements before the arrival of Europeans. Graillon praised the Gaudreau archeological site, situated at the confluence of the Salmon and Saint Francis rivers in Weedon. «So far, it’s the site that has yielded the most artefacts in the Eastern Townships.» At this site, archeologists found more than 1000 tools, pottery objects and projectile points.

Alain Coulombe discussed the covered bridges of the region. He detailed the structures and the methods of construction of those bridges still standing today, such as the John Cook and McDermott bridges in Cookshire-Eaton, not to mention the famous McVetty-McKenzie bridge in Lingwick. “It was as if I had unearthed some corpses,” he exclaimed after having consulted archives dating 30 to 40 years ago, when he was preparing his presentation. Coulombe gained his expertise on the subject when he toured the province for the Ministry of Culture.

The other speakers offered presentations in the two languages. Steve Cameron revisited the history of the Craig and Gosford roads. The retired journalist Jean-Claude Vézina spoke about the challenges faced by the settlers in gaining access to the eastern part of the Townships. Finally, Yves Bibeau traced the evolution of trucking.

A Step Back in Time
Along the walls surrounding the audience in the Armoury were numerous artefacts. Installed in one corner was a horse-drawn carriage. On the other side of the room were geographic maps of yesteryears from the Bury Society’s archives, the Eaton Corner Museum, and the Eastern Townships Resource Centre. They were accompanied by artwork furnished by the Eaton Corner Museum and created by the local artist Denis Palmer.

Several persons were even dressed in period costumes, as were Ed Pedersen and John Mackley of the Bury Historical and Heritage Society. The same was true of Louis Lapierrière who, with his Louis Écolo Antiquité business, highlighted costumes and objects related to trains. «The regions were developed by trains. In this sector here, it was dominant. Each village had its station.» As an example, he mentioned East Angus with its pulp and paper mill.

The organisers from the Bury Society were pleased. «We are very, very happy to see everyone who came out,» said the Society’s president, Ed Pedersen. Archivist and board member John Mackley, also said he was «very satisfied.» In his view, the event had the advantage of «making history better known to the public in general. It’s a very interesting subject. It’s more pertinent than Facebook!»

Pedersen agreed wholeheartedly. «It’s our mandate to promote our heritage. That is becoming more and more difficult in a modern society.» In this sense, he found it important that the day should unfold in both languages, because a good part of the communities of both Bury and Eaton Corner have English as their mother tongue.
The various presentations on the history of transportation were captured on video. «We’re aiming to have something to show to students or in meetings in the future. The goal is not for profit, it’s for an educational aim,» said Mackley. He hopes to organise similar events again in the future.