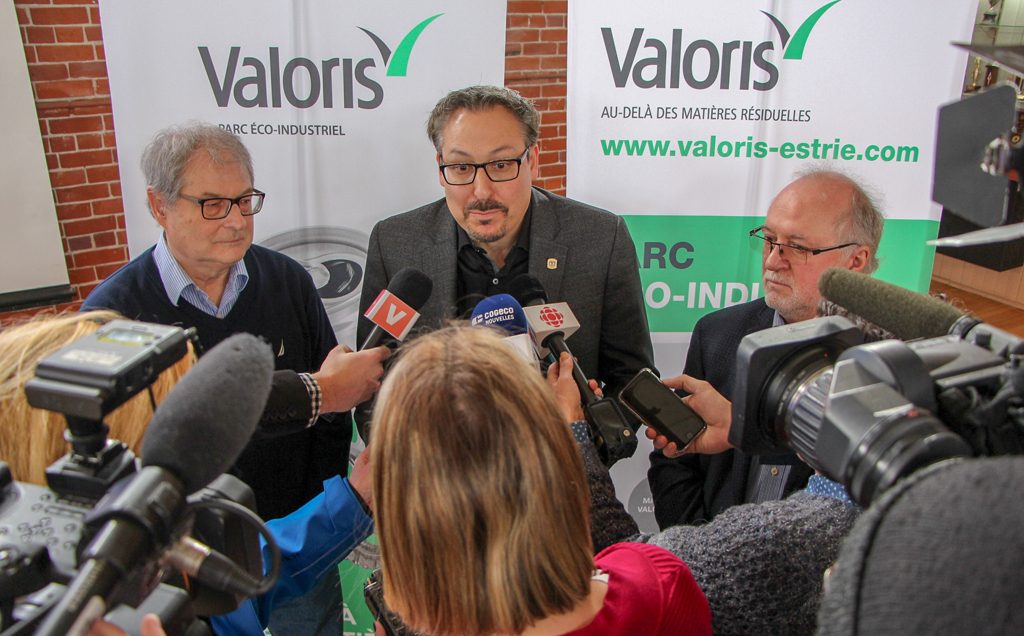 Anticipating that its engineered landfill site will be used to its full capacity by the middle of next year, Valoris has launched a $60 million expansion project. Covering an area of 33 hectares, the future landfill site would be in operation as of the summer of 2021. A public meeting at the Community Centre in Bury presented the project to about 100 citizens. They were quick to express their discontent and anger to the representatives of the recovery centre.

Earlier in the day, the new president of the board of directors and mayor of Sherbrooke, Steve Lussier, met with media representatives. «I consider it important to enlarge the present site, which would permit an additional capacity of about 4.5 million tonnes and would prolong its life by more or less 50 years,» he said, speaking in French.

The current engineered landfill site was put in service in December 2009, and covers 13 hectares. Since 2013, when the City of Sherbrooke began sending its waste materials to Bury, Valoris has been serving 190,000 Estrians.

Public Consultation
The director of communications, Louis Longchamps, opened the information evening, which lasted close to three hours. «It’s the beginning of a new partnership between Valoris and the community, and we really want it to work,» he said in French. If he was talking about open communication between the two parties, he quickly received it. After viewing a video presenting the company and its expansion project, the first discussion period set the tone for the meeting.

«An engineered landfill costs an arm and a leg to build!» exclaimed Monique Scholz, a municipal councillor for the Canton de Hampden. «I am horrified that, my god, next year we won’t have any more space. What happened? How did it fill up so fast?»

More than once, the Valoris director of projects, Jean-Jacques Caron, was not able to respond adequately to the citizens’ questions. All the same, Caron and Longchamps assured the audience that all of their questions would be resolved during three thematic workshops to take place in March, April, and May. Themes to be addressed in detail include water quality, odor emissions, and greenhouse gases, as well as the visual integration of the project into the landscape.

«The deforestation will be done gradually,» explained the director of communications. «The land around Valoris belongs to Domtar. Clearing the trees will harmonize with the activities already being carried out around us. The cut wood will be exploited.»

Next Steps
This week, the management of Valoris met with Benoit Charette, Minister of the Environment and the Fight against Climate Change. Next Wednesday, February 27, they are offering interested persons a visit to the Valoris facilities. These citizen meetings, along with the three thematic workshops previously mentioned, are part of a social outreach in relation to the communities neighbouring the Valoris site.

«The social acceptability of this project to enlarge the landfill site is essential, and I am very proud of the public consultations that have been put in place,» reiterated the board president, Steve Lussier. A report on the consultations will accompany the application for expansion, which is to be made to the ministry after mid-June.

The day before the consultation was launched, it was announced that the director general of the eco-industrial park, Jean-François Sornin, would be leaving his position on March 22. «I am leaving Valoris at a moment when the contractual disputes related to the construction of the sorting centre are in the process of being settled, and the future looks promising,» he announced in a press release, in French. His successor is to be announced over the course of the coming weeks.