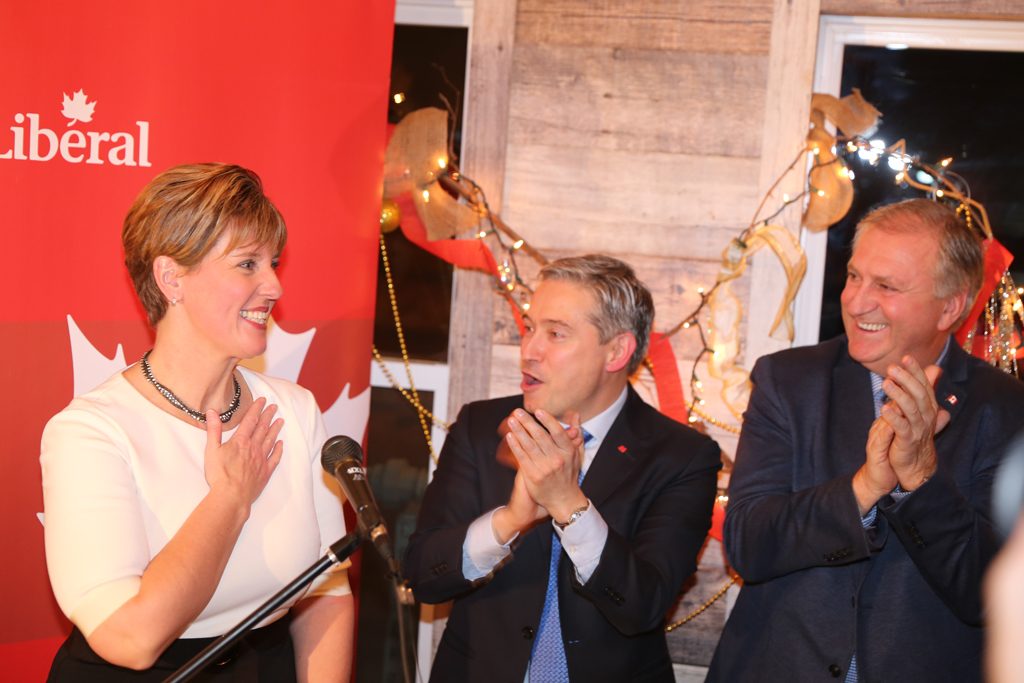 The current Member of Parliament for Compton-Stanstead and Minister of International Development, Marie-Claude Bibeau, will be running in the next federal election in October 2019. That’s what she announced last month at a celebration of her nomination at the Microbrasserie Coaticook.

Proud of her first term, Ms. Bibeau said she wants to continue to defend the interests of the region’s citizens. «We will continue to tackle social and economic inequalities during the second term.» If re-elected, she plans to focus on manpower shortages, continuing improvement of connectivity in rural areas, and the fight against climate change.

Demanding but rewarding
During the evening of her nomination, Minister Bibeau discussed her motives in seeking a second term in a row. «In 2015, I did not really know what I was embarking on. I had not anticipated the human aspect of the job.» This may include accompanying an elderly person to the Canada Revenue Agency or regularizing the situation of an immigrant woman who was a victim of spousal abuse. «It’s not always easy, but at the same time, when you accompany these people in times of distress, it’s extremely comforting and rewarding. It gives a whole new meaning to the work.»

Among the positive aspects of the profession, she listed centennial birthdays, medal ceremonies for military personnel and volunteers, as well as attending many community events. And with 32 countries visited in three years, travel is part of everyday life. As Minister of International Development, «I never thought I would become a strong voice for feminism on the international stage.»

Files closed and files upcoming
The former director general of the Sherbrooke Museum of Nature and Science is proud of her accomplishments during her first term. “We have secured funding for the Mont-Mégantic Observatory for seven years.” Maintaining the supply management system despite American threats also figures on the list of victories for Minister Bibeau.

In this regard, Phase Two of the Dairy Farm Investment Program opens next Monday. It is designed to help dairy farmers adjust to the anticipated impacts of the Comprehensive Economic and Trade Agreement (CETA) between Canada and the European Union. In Phase One, 36 businesses in the riding, including the Ferme Élégante in Dudswell, shared $3.8 million.

Sherbrooke Airport
Concerning the offer of regular commercial flights at the Sherbrooke airport, the Compton-Stanstead representative said that now «the ball is in the court of the City» of Sherbrooke. She pointed out that the next step requires a draft agreement between the City and an air carrier.
“We have obtained the assurance that we will have airport security services for the Sherbrooke Airport when an agreement has been signed with an airline that offers regular flights,” she reiterated.
In relation to the process leading to the designation of the Cookshire-Eaton site, discussions between the Canadian Air Transport Security Authority and the management of the Sherbrooke Airport have been dragging on since December 2015.